Stranger Things Cast - Everything You Need To Know

When a small boy goes missing, his mother, a police chief, and his friends must face horrific supernatural forces to find him. 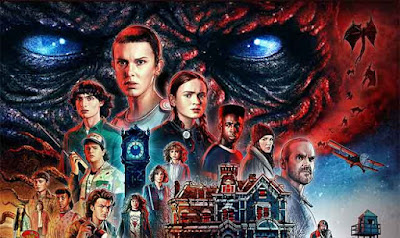 Find out which song Millie Bobby Brown listens to for character inspiration, how Gaten Matarazzo and Noah Schnapp make their castmates laugh, and who impressed Joe Keery's performance.

In a small town where everyone knows everyone, a strange incident sets in motion a chain of events that leads to the disappearance of a kid, tearing at the fabric of an otherwise calm community. Dark government organisations and seemingly hostile supernatural powers descend on the village, while a few residents realise that there is more going on than meets the eye.

The Duffer Brothers Discuss the Season 4 Influences of "Stranger Things"

In the latest episode of "Stranger Things," creators Matt and Ross Duffer describe the villains and incidents that haunted their childhoods and impacted their character designs, from Pinhead to Pennywise.

Former Journey lead vocalist Steve Perry has stated that the Stranger Things season 4 remix of Journey's 1980s mega single Separate Ways (Worlds Apart) was done very much the way he wanted it done in the 1980s, but lacked the technology. Steve was so amazed that he assisted in the creation of the remix.